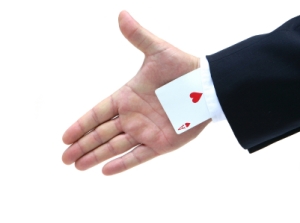 After reaching an agreement on responsibilities and salary, the vice president (VP) said to a general manager (GM) candidate, “Well, I think we understand each other, but I’ll need to check this out with the president.”

A few days later the VP said to the candidate, “The president is OK with most of our agreement but wants you to be responsible for warranty settlements.  He also thought that we were about five percent too high on the salary.”

This is an example of a negotiation “dirty trick.” The GM candidate negotiated in good faith with the VP believing that the VP had decision-making authority.

The candidate faces the following options:  (1) accept the revised offer, (2) reject the offer, or (3) continue negotiating.

Option 1 is too soft. Option 2 is too hard.  Option 3, continue negotiating, might include such responses as:

“You gave me the impression this was your decision.  Now, you say you did not have the authority?  How do you expect me to accept that?   Here are some other options we could look at . . .”

The intent is for the GM to identify the VP’s behavior and continue seeking options that are reasonable.

What do you think? Cancel reply

This site uses Akismet to reduce spam. Learn how your comment data is processed.